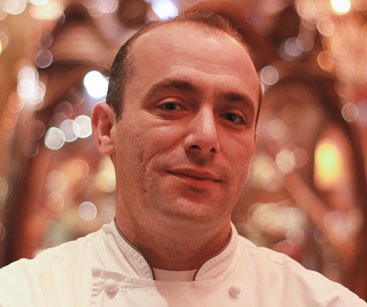 Adil Slassi, a Moroccan native, grew up immersed in a world of rich, traditional cuisine central to daily life between Spain and France. Being from a former French colony, and miles from southern Spain he always had an appreciation for “la cuisine française,” and Andalusian cuisine which lead to an interest in the cuisine of other Mediterranean countries. Alongside his mother in her traditional Mediterranean kitchen, and traveling along Europe with his father, a commercial pilot, Slassi experimented with recipes as a hobby at tapas bars and bistros in summertime, while concentrating on his university studies in economics.

Slassi moved to Seattle, Wash. in 1998 to study commercial aviation, but decided to follow a more creative path within the culinary world. Rather than start his studies anew, he decided to gain experience in the field from the bottom up. Slassi focused on working for Mediterranean or French restaurants and quickly mastered the basics techniques and recipes. Within a few years, he served as Chef de Cuisine at Seattle’s Au Buchon, a popular French bistro, where he managed the entire kitchen. In 2003, Slassi relocated to Southern California and was appointed Chef of Le St. Germain in Indian Wells. There, he worked under Owner/ Master- Chef Michel Depras and Executive Chef Didier Tsirony, furthering his mastery of French cuisine, while bringing popular Mediterranean dishes to the menu of the classic French restaurant.

Slassi would find himself at Wynn Las Vegas a couple of years later, where among other endeavors he opened the Mediterranean-themed restaurant Lavo at The Palazzo, as well as Terzetto at M Resort. He is currently the Executive Chef at Favorite Bistro.