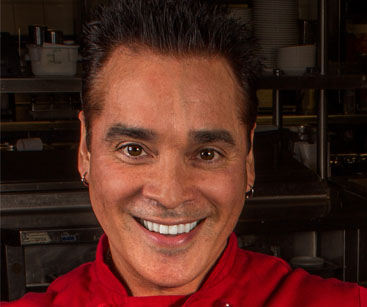 Executive Chef Beni Velázquez is a chef that takes risks in the kitchen and delivers big rewards in all of his original venues. A style all his own known as Eclectic Latin Fusion, began in his Puerto Rican family’s kitchen while living in New York City and followed by travels that infused Velazquez with passion and curiosity that shape his worldly menu creations. Pulling elements from Spain, Italy, France, Morocco, Egypt, Israel, China and Lebanon, his cuisine is as lively and original as the city he cooks in.

The self-taught chef spent time cooking in the kitchen with his mother from an early age, but during and after college, Velazquez was on a different trajectory towards architectural design and the performing arts. He began working in hotel banquet and catering kitchens and worked his way up the ranks, learning technique and cooking fundamentals from the French chefs with whom he shared the kitchen. He soon established himself as a professional chef in hotels including The Four Seasons and the Ritz-Carlton and also served as corporate chef for Stanford Hospital and Clinics in Palo Alto, Calif. and University of California, Los Angeles.

In February 2011, Velazquez landed in Las Vegas, where he opened a Latin fusion restaurant in the arts district known as Bar+Bistro. Since its inception, he has earned the restaurant a spot in several Best Of lists in national, international and regional publications including Zagat. Velazquez was also featured as a contestant on Food Network's Chopped. Committed to helping those less fortunate, Velazquez regularly contributes his time to Three Square Food Bank, March of Dimes and American Heart Association’s Flavors of the Heart.