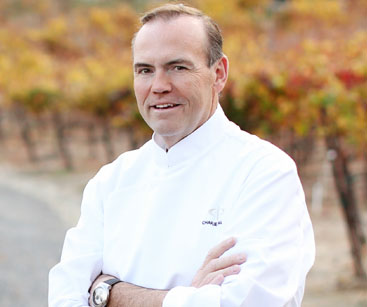 Since the beginning of his celebrated career, master chef, hospitality entrepreneur and hotelier Charlie Palmer has received critical acclaim for his signature Progressive American cooking. A style built on rambunctious flavors and unexpected combinations with a deep infusion of classical French cuisine. Charlie Palmer’s upbringing on a farm in upstate New York, paired with his training in various kitchens in France and his education at The Culinary Institute of America, provided him with the ability to form a unique style and ultimately strikeout on his own. In 1988, he made a significant commitment to creating dishes featuring regional American ingredients at his sublime Aureole.

Over the years, Palmer combined his creative cooking spirit and flair for business to open dozens of notable restaurants across the country, award-winning boutique hotels and a growing collection of food-forward wine shops such as Mystic Hotel by Charlie Palmer and Burritt Room + Tavern in San Francisco, Aureole at the Mandalay Bay Resort & Casino and Charlie Palmer Steak at the Four Seasons in Las Vegas.

A 20-year board member of Citymeals-on-Wheels and longtime supporter of Share our Strength, chef Palmer and his namesake restaurant and hotel group frequently give back to the community with their trademarked signature events.

A member of James Beard "Who's Who of Food & Beverage in America," inducted into the casino community’s Gaming Hall of Fame in 2011 and named Chairman of the Board of Trustees of The Culinary Institute of America in 2012, Palmer is a respected and admired hospitality figurehead. A frequent guest on NBC's Today Show, Charlie Palmer is also the author of six cookbooks.