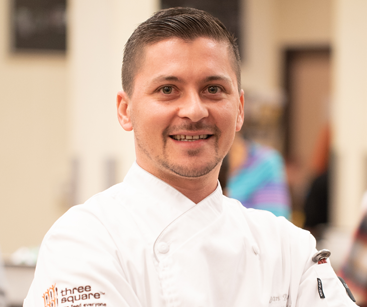 In 1990, California native, Ryan Brown moved to Las Vegas, where he would follow his passion for cooking. After completing an externship with Three Square Food Bank, he became a permanent team member after graduating from the Le Cordon Bleu in 2011. From production cook to executive chef, within eight years, Brown rose up the culinary ladder. In Brown’s role, he is able to exercise his passion for cooking, for making people happy with food and by helping the many hungry people in the community through Southern Nevada’s largest hunger-relief organization. He plays a critical role in the kitchen, managing on average 50 volunteers who help assemble meals for childhood nutrition programs, such as Kids Cafe® - a program that provides after-school meals to children in need.

Outside of the kitchen, Brown enjoys motocross, Ultimate Fighting Championships and Jiu-Jitsu. His ultimate goal is an ambitious one, yet he will continue to do his part to make a difference in ending world hunger.