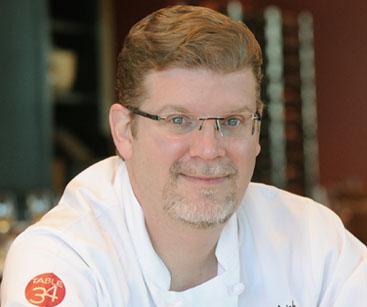 Locally acclaimed chef Wes Kendrick spent most of his years in Redlands, California. Around the age of 18, he decided to enter the culinary field. Cooking became a passion that has evolved into honing and mastering his skills throughout the years.

Kendrick developed his culinary skills through many experiences. He worked with Leonard Corbett of Corbett Catering, and was aspired by chef John Richardson, formerly at Joe Greensleeves, where he later became executive chef.

Kendrick’s culinary talents landed him in Las Vegas in 1999 to open Wild Sage Café. In 2004, the restaurant re-opened as Table 34 -- a classic neighborhood bistro just south of the Las Vegas Strip. Kendrick presents Table 34 as a California-style comfort cuisine with French and Italian flavors.

When he’s not in the kitchen, chef Kendrick enjoys dining out at restaurants in the Las Vegas community.