A Partnership Built on Purpose 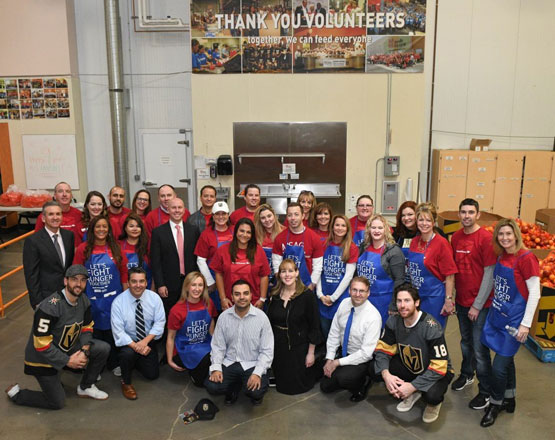 Bank of America and Three Square Food Bank have been fighting hunger together for the past 10 years. Since 2008, Bank of America employees have volunteered thousands of hours and have donated the equivalent of more than 1.2 million meals. Al Welch, president of Bank of America, took a moment to speak with us on how his company is playing an active role in ending hunger.

Why does Bank of America support Three Square's mission?

One in seven individuals in Southern Nevada struggles with hunger – that's more than 279,000 food-insecure people in our community, including over 109,000 children.

With the Las Vegas unemployment rate higher than the national average at nearly five percent, access to basic resources such as housing, shelter and food are important for people to achieve economic mobility.

The bank supports hunger relief as part of our broader commitment to help put people in need on a path towards success. Food security is a fundamental first step toward economic mobility and empowerment, which is why we have and continue to support Three Square in the fight against hunger.

Providing consistent access to food and support toward financial stability can be critical for families facing poverty. Through our partnership with Three Square and Feeding America, we work to ensure that families don't have to choose between putting food on the table and paying vital bills.

What are some ways that Bank of America is giving back to the community through Three Square?

We encourage our employees to take two hours of paid leave per week to volunteer with a nonprofit of their choice. Last year, bank employees volunteered nearly 12,000 hours in Southern Nevada, with hundreds of hours spent with Three Square.

This summer, Bank of America awarded $402,500 to 41 Las Vegas nonprofits, including Three Square, that provide basic resources and career-readiness tools contributing to economic success. The awarded funds allowed Three Square to provide an additional 30,000 meals to hungry Southern Nevadans. These grants were part of nearly $43 million in grants the Bank of America Charitable Foundation provided across the country to advance economic mobility.

Another example of how the bank gives back to the community through Three Square can be seen with our Give A Meal program. For the sixth consecutive year, we've partnered with Feeding America and its network of 200 member food banks to support the Give A Meal program. For every $1 donated to Give A Meal through the end of the year, the Bank of America Charitable Foundation will give $2 more up to $1.5 million in online donations nationwide. Since inception, the program has raised $196,707 equating to 590,121 meals.

Bank of America is truly honored to work alongside organizations like Three Square Food Bank that are on the ground every day helping to make people's lives better. This is the seventh consecutive year Feeding America and Bank of America have joined forces to reduce food insecurity in local communities through Give A Meal. For more information on how you can help break the cycle and end hunger in our community, please visit bankofamerica.com/give.