Breakfast Takeover — A Spin in Getting Kids Excited About Breakfast 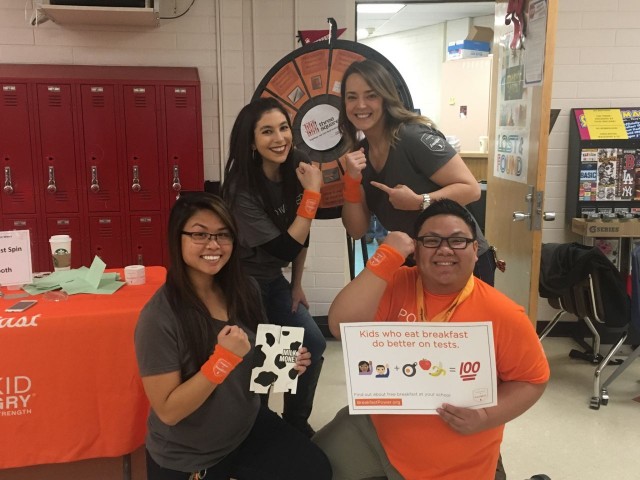 In 2015, Three Square launched the "Powered by Breakfast" campaign to support the Clark County School District Food Service in implementing the Breakfast After the Bell Program. The program allows schools with a free and reduced-price lunch eligibility rate of 70 percent or greater to serve free breakfast to all their students.

As part of Powered by Breakfast, my team and I came up with the idea of doing "breakfast takeover" events during National School Breakfast Week from March 6 through 10. The goal was to bring awareness about school breakfast through student-focused activities and encourage students to fight hunger, improve nutrition, and empower children to learn each day.

These fun-filled, and interactive activities were inspired by an event held at Cashman Middle School. Cashman saw a rise in breakfast participation after an increased awareness of the free breakfast offered at their school. We hoped to replicate this outcome at other schools, because student engagement with the program increased overall awareness and participation. As a result, we set out to bring these activities to five middle schools. We kicked-off National School Breakfast Week at Cashman and also brought this "travelling show" to Findlay, West Preparatory Academy, Monaco and Gibson middle schools. What a fun week!

The carnival-style games and social media booth were geared to highlight the benefits of breakfast, and each game came with Powered by Breakfast swag items as prizes to heighten enthusiasm. We proudly and excitedly reminded the students that their school is powered by breakfast, and taught them that breakfast helps kids focus in class and do better on tests.

Not only were the students engaged, they learned more about the most important meal of the day. Many of them even asked when we were coming back, and if we could return during lunchtime — success! As school breakfast advocates, that is music to our ears!