Little Girl Makes a Big Difference for Children in Need 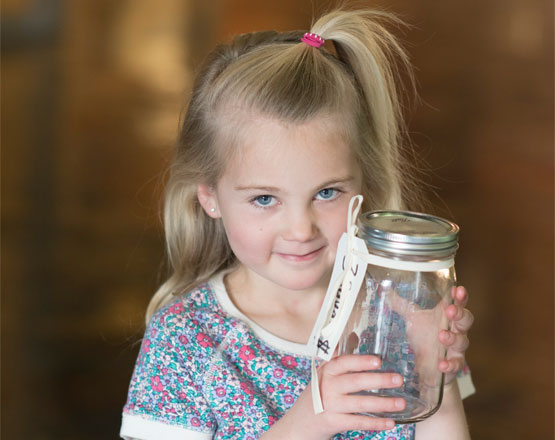 You may see some of the letters and emails we share telling the story of what Three Square is doing and how you can help out. Our latest campaign features a little girl named Vivi (Vivienne) who has made a big impact in the fight against childhood hunger.

Vivi was first inspired after visiting Three Square for the first time with her mom and dad who came to volunteer. Although she was too young to help with volunteer efforts (volunteers must be 10), she understood the great need in our community. Vivi was inspired to make a difference while watching her parents volunteer and learning about the 117,000 food-insecure children in our community.

While driving home from Three Square with her parents, Vivi said she wanted to figure out how she could raise money so that hungry children could "eat and eat and eat." Vivi and her mom ran with the idea and created a video asking family and friends to fill her empty jar. You can watch Vivi's passion for helping others shine through in the video below.

Within days, Vivi's video was shared nearly 300 times on Facebook. The awareness, along with Vivi's energy and compassion, helped fill the jar with $250. With every dollar raised providing three meals, Vivi's efforts created 750 meals for hungry children in Southern Nevada.

Vivi's story proves that it doesn't matter your age or circumstances in life — if you want to make an impact on the lives of others, you can. Just follow Vivi's lead. Anyone can make a difference, simply by donating a dollar, an hour, or a can.

Together, we can feed everyone.