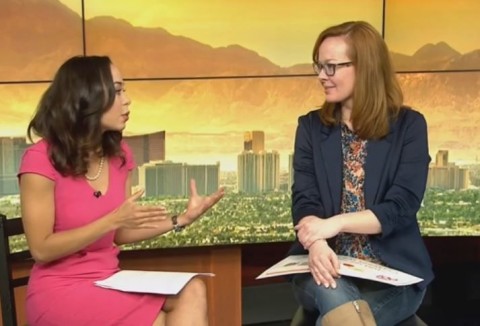 Three Square's Programs Director, Dorian Stonebarger, appeared on NBC KSNV News 3 to share details about the Powered By Breakfast program that supports the efforts of CCSD schools in implementing "Breakfast After the Bell," and helping children succeed in school. Dorian discussed the outreach efforts designed to generate awareness for families that might not know about the program, which is sponsored by Share Our Strength's No Kid Hungry campaign.

The legislation passed in 2015 mandating all schools with 70 percent or higher free or reduced-price meal eligibility to serve breakfast after the start of the school day.

It presents the opportunity to fuel the future of an entire generation of food-insecure Nevadan students.

"Every time that we make sure a child is well fed, we are fueling their brains so that they can further themselves in life, and make sure they're ready for higher education and beyond," explains Dorian.

To further increase breakfast participation, Three Square partnered with Share Our Strength to build an advertising campaign around breakfast awareness. Breakfast Power is being promoted on digital billboards, bus shelters, and buses crisscrossing the valley. The ads are designed to communicate the messaging that students who consume breakfast in the morning perform better in school.

On average, students score 17.5 percent higher in math and are 20 percent more likely to graduate high school according to the "Hunger In Our Schools" national research project. High school graduates earn an average of $10,000 more annually and are less likely to experience hunger as adults than individuals who did not graduate from high school.

Share Our Strength's No Kid Hungry campaign is working to connect more students with school breakfast every day in communities across Clark County. The Clark County School District Food Service Department spearheaded the implementation of Governor Sandoval's Breakfast After the Bell law in eligible schools, connecting more than 71,000 students with the fuel they need to succeed.

Throughout the promotional campaign, Three Square and Share Our Strength have also partnered to create breakfast takeover events at local middle schools to further increase awareness and drive participation in school breakfast programs.