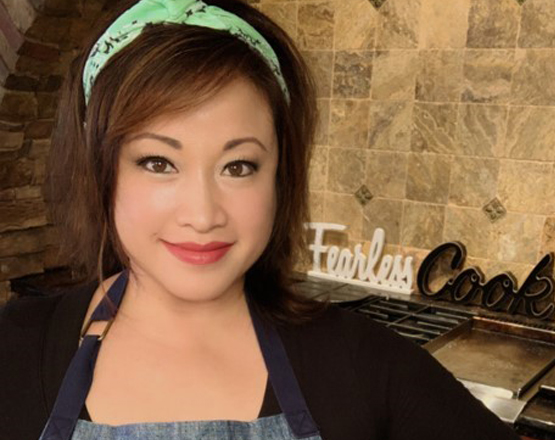 Lorraine Moss grew up in California in a multiracial family with an eclectic background. Her palate was exposed to Latin and European flavors from her mother’s side and Asian and island spices from her father’s side. Family gatherings included a multitude of smells and tastes that represented all of America in its immigrant history.

Up until 2013, Moss cooked only for loved ones. A UCLA graduate in Communication Studies, she was also an Emmy nominated TV news journalist. But after a decade, she had burnt out. Her husband Mitch asked her the question we should all ask ourselves: “If you could do anything for a living, what would you do... even if you weren’t paid?”

Cooking was the answer, and so she returned to school and earned a culinary degree at College of Southern Nevada. While Moss was volunteering for Chefs for Kids, she met a wonderful person who became her first chef mentor and gave her a shot on the line. Moss prepped and cooked crab cakes, scallops and lobsters at Gallagher’s at New York-New York Hotel & Casino. Although she suffered several burns and cuts, she was promoted quickly to chef de partie. From there, she moved on to Bazaar Meat and staged at e by Jose Andres.

Moss earned a mentorship with the prestigious James Beard Foundation and worked as sous chef for Susan Feniger and Mary Sue Milliken at Border Grill in Los Angeles and Las Vegas. She has volunteered and cooked for No Kid Hungry, Alex’s Lemonade Stand, as well as Cool Comedy, Hot Cuisine to benefit the Scleroderma Research Foundation. Moss even got to cook for a week with several Michelin starred chefs at the James Beard House. She also worked as a sous chef at Joe’s Stone Crab.

Moss lives in Henderson with her husband Mitch Moss and two dog children Dexter and Mickey. She loves to travel, try new restaurants and wineries and spend time in the water swimming, paddle boarding and boating.