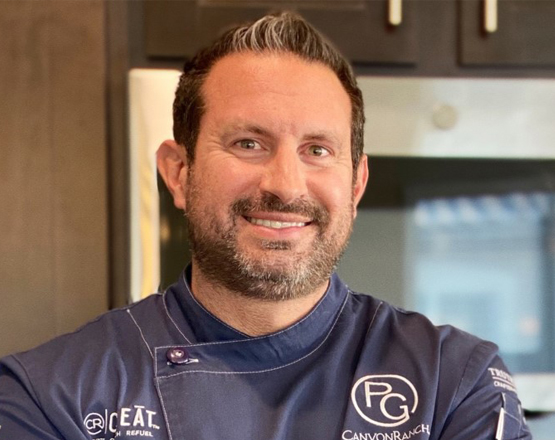 Chef Pete Ghione started his cooking career 24 years ago in Shelton, Connecticut. He held two jobs simultaneously while in high school prior to graduating from New England Culinary Institute in Burlington, Vermont. During culinary school, he completed two internships: the first in Booth Bay Harbor, Maine, and the second in Napa, California. After graduation, he moved from Napa, California, to take on Las Vegas, Nevada. At the age of only 26, he was promoted to Executive Chef of the Rio All Suite Hotel and Casino. He managed a staff of 550 people, 16 restaurants and 22 kitchens in total, feeding an average of 16,000 people per day. During his time at the Rio, Ghione was also one of five chefs on Team Las Vegas, which was the first year Las Vegas was represented at the World Culinary Olympics in Erfurt, Germany. The team took home a silver medal.

Once he completed seven years total with Caesars Entertainment, Ghione began working at Dragon Ridge Country Club in Henderson, Nevada. It was here where he started working with organic ingredients. After building a close relationship with a doctor who specializes in preventative health care, Ghione opened his own organic restaurant and began to specialize in nutrition, inspiring people to eat healthy and lose weight. Ghione then proceeded to open his own business as a private chef who specialized in preparing meals with a healthy purpose. A major focus of his was cooking for cancer patients and those recovering from cancer. He spent three years dedicated to private cooking and building a website based on foods that fight cancer before being recruited to open his first major casino in downtown Cincinnati, Ohio, where he was featured in an article in Esquire magazine. After a successful opening, Ghione moved to a casino in Quad Cities, Illinois, to gain a better work-life balance as he raised his daughter as a single father. In September of 2015, he was given an amazing opportunity to work for Canyon Ranch Spa Club in Las Vegas, Nevada, and operate three organic restaurants, again regaining his passion for cooking food with a healing, healthy purpose. By January 17, 2019, Ghione launched the very first and only 100 percent plant-based menu on the Las Vegas Strip. He believes that anything other than plants can slow down, stop or reverse the positive progress to wellness.

Ghione has been able to share his passion of eating healthy in many magazine publications along with every major news network in Las Vegas. He has also made TV appearances in Salt Lake City, Utah; Denver, Colorado; and Cincinnati, Ohio. In addition to running for “Man of Year” for the 2020 Leukemia & Lymphoma Society campaign, Ghione is the Chairman and Spokesman for Flavors for Life, a nonprofit focused on educating the community to eat and cook healthy to eliminate the obesity epidemic.